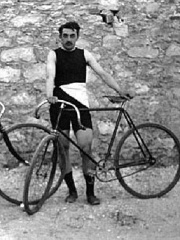 Paul Masson (11 October 1876 in Mostaganem – 30 November 1944) was a French cyclist who raced at the 1896 Summer Olympics in Athens.In 1895, Masson's application for the French World Championship national team was rejected until later that same year he won two major races, securing his place on the team.Masson was 19 when he raced in the 1896 Summer Olympics in three track cycling events, all on the same day, winning every one. In his first event at the Neo Phaliron Velodrome, the 2 km (1.2 mi) 6-lap sprint, there were only three other finishers, German Joseph Rosemeyer having dropped out early on. Masson won the race by two seconds ahead of Stamatios Nikolopoulos of Greece, and fellow Frenchman Léon Flameng. Read more on Wikipedia

Among politicians, Paul Masson ranks 6,498 out of 15,710. Before him are Goh Chok Tong, King Nan of Zhou, Maria of Austria, Duchess of Jülich-Cleves-Berg, Roman Dmowski, Quintus Caecilius Metellus Pius Scipio Nasica, and Emperor Go-Ichijō. After him are Gundemar, Stefan Czarniecki, Hwang Kyo-ahn, Smilets of Bulgaria, Tigranes III, and Sin-shumu-lishir.