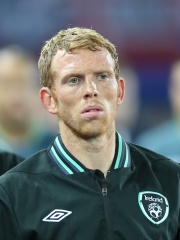 Paul Jason Green (born 10 April 1983) is a professional footballer who played most recently in the football league as a midfielder for League Two club Crewe Alexandra. He is now a player with non league side Boston United in Lincolnshire, UK (signed 17.08.2020) He has also played at senior international level with the Republic of Ireland. Green spent seven years at Doncaster Rovers, where he played more than 250 matches and earned three promotions in five years (from the non-league to the Football League Championship) as well as winning the Football League Trophy. Read more on Wikipedia

Since 2007, the English Wikipedia page of Paul Green has received more than 22,922 page views. His biography is available in 19 different languages on Wikipedia making him the 10,952nd most popular soccer player.