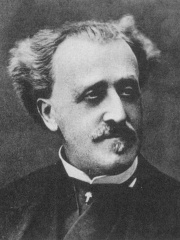 Paul-Ferdinand Gachet (30 July 1828 – 9 January 1909) was a French physician most famous for treating the painter Vincent van Gogh during his last weeks in Auvers-sur-Oise. Gachet was a great supporter of artists and the Impressionist movement. Read more on Wikipedia

Paul Gachet was a French physician and painter who was a close friend of Vincent van Gogh. Van Gogh was often treated by Gachet for mental illness and physical conditions. Van Gogh died in 1890, and Gachet died in 1909.

Among people born in 1828, Paul Gachet ranks 17. Before him are Nikolay Chernyshevsky, John Langdon Down, Louise of the Netherlands, Joseph Swan, Albert of Saxony, and Albert Marth. After him are Edmond François Valentin About, Ferdinand Cohn, Alexander Butlerov, Prince Friedrich Karl of Prussia, Dora d'Istria, and Prince Adalbert of Bavaria. Among people deceased in 1909, Paul Gachet ranks 19. Before him are Grand Duke Michael Nikolaevich of Russia, Felice Beato, Zinovy Rozhestvensky, Red Cloud, Carlos, Duke of Madrid, and Emil Erlenmeyer. After him are Francisco Ferrer, Adelaide of Löwenstein-Wertheim-Rosenberg, Princess Marie of Orléans, Besarion Jughashvili, Arnold Janssen, and Princess Maria Teresa of Bourbon-Two Sicilies.