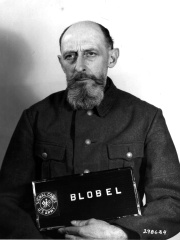 Paul Blobel (13 August 1894 – 7 June 1951) was a German Sicherheitsdienst (SD) commander and convicted war criminal who played a leading role in the Holocaust. He organised and executed the Babi Yar massacre, the largest massacre of the Second World War at Babi Yar ravine in September 1941, pioneered the use of the gas van and, following re-assignment developed the gas chambers for the extermination camps in occupied Poland. From late 1942 onwards he led Sonderaktion 1005, wherein millions of bodies were exhumed at the massacre sites and extermination camps across Eastern Europe in an effort to erase all evidence of the Holocaust and specifically of Operation Reinhard. Read more on Wikipedia

Paul Blobel was a Nazi officer who was responsible for the Babi Yar massacre in September 1941.

Among politicians, Paul Blobel ranks 2,654 out of 15,710. Before him are 3rd Dalai Lama, Hun Sen, Vasily Blokhin, Sargon I, Milton Obote, and John Sherman. After him are Tetricus I, Vladimir Ivashko, Countess Augusta Reuss of Ebersdorf, Stanislav Shushkevich, Alassane Ouattara, and Fernando Henrique Cardoso.