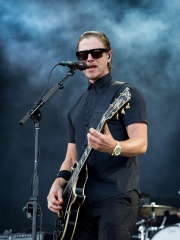 Paul Julian Banks (born 3 May 1978) is an American musician, singer, songwriter, and DJ. He is best known as the lead vocalist, lyricist, and guitarist of the rock band Interpol. He released a solo album called Julian Plenti is... Skyscraper in 2009 under the name Julian Plenti, though his solo material is now recorded under his real name. Read more on Wikipedia

Among singers, Paul Banks ranks 2,389 out of 3,541. Before him are Sabrina, Alan Dawa Dolma, Nick Oliveri, Tanya Tucker, Louane, and Slick Rick. After him are Shy'm, Sizzla, Basta, Mark Tremonti, Lúcia Moniz, and Anna Semenovich.