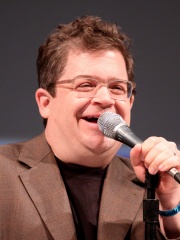 Patton Peter Oswalt (born January 27, 1969) is an American stand-up comedian, actor, voice actor, and writer. On television, he is known for his role as Spencer Olchin in the sitcom The King of Queens (1998–2007) and guest starring as the Koenigs on Agents of S.H.I.E.L.D. (2014–2020). After making his acting debut in the Seinfeld episode "The Couch", he has since appeared in a variety of television shows including, Kim Possible, Parks and Recreation, Community, Drunk History, Reno 911!, Mystery Science Theater 3000, Archer, Veep, and Brooklyn Nine-Nine. He currently narrates the sitcom The Goldbergs (2013–present) as adult Adam F. Read more on Wikipedia

Since 2007, the English Wikipedia page of Patton Oswalt has received more than 7,702,430 page views. His biography is available in 50 different languages on Wikipedia making him the 4,803rd most popular actor.