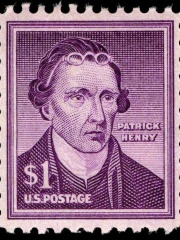 Patrick Henry (May 29, 1736 – June 6, 1799) was an American attorney, planter, politician, and orator best known for his declaration to the Second Virginia Convention (1775): "Give me liberty, or give me death!" A Founding Father, he served as the first and sixth post-colonial Governor of Virginia, from 1776 to 1779 and from 1784 to 1786. Henry was born in Hanover County, Virginia, and was for the most part educated at home. After an unsuccessful venture running a store, and assisting his father-in-law at Hanover Tavern, Henry became a lawyer through self-study. Read more on Wikipedia

Among politicians, Patrick Henry ranks 8,919 out of 15,710. Before him are Hugo von Pohl, François de Charette, Glaucias of Taulantii, Alan IV, Duke of Brittany, William Petty, 2nd Earl of Shelburne, and Maria Dobroniega of Kiev. After him are He Long, Domenico Selvo, Eleanor of Naples, Duchess of Ferrara, Paolo Renier, Giovanni Spadolini, and Jalal-ud-din Khalji.