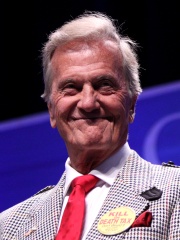 Patrick Charles Eugene Boone (born June 1, 1934) is an American singer, composer, actor, writer, television personality, motivational speaker, and spokesman. He was a successful pop singer in the United States during the 1950s and early 1960s. Read more on Wikipedia

Since 2007, the English Wikipedia page of Pat Boone has received more than 2,901,241 page views. His biography is available in 29 different languages on Wikipedia making him the 708th most popular singer.

Among singers, Pat Boone ranks 711 out of 3,001. Before him are Sheila, Papa Wemba, Peter Frampton, Samira Said, Andrea True, and Natalie Imbruglia. After him are Aaliyah, J-Hope, Dado Topić, MC Hammer, Arash, and Christine McVie.