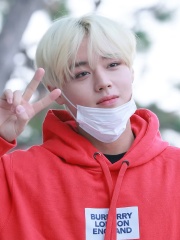 Park Ji-hoon (Korean: 박지훈; born May 29, 1999) is a South Korean singer and actor. Park first made his debut at just eight years old as a child actor and advertisement model, appearing as a supporting cast member on the MBC historical drama Jumong (2006) and earned roles in several television dramas such as The King and I, Kimchi Cheese Smile and Iljimae. He later became known as an idol for his participation in the reality competition show Produce 101 Season 2, where he finished in second place overall and became a member of the boy group Wanna One. Read more on Wikipedia

Among singers, Park Ji-hoon ranks 2,704 out of 3,528. Before him are Carlos Rivera, Shirley Clamp, Chynna Phillips, Maria Rita, Lia, and Angela Zhang. After him are Krassimir Avramov, Gianna Terzi, Massari, Sharon Kovacs, Hyolyn, and Rebeka Dremelj.