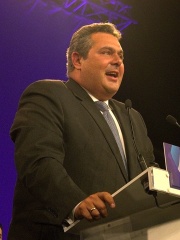 Panagiotis "Panos" Kammenos (Greek: Παναγιώτης "Πάνος" Καμμένος, pronounced [panaˈʝotis ˈpanos kaˈmenos]; born 12 May 1965) is a Greek politician and the founder of the right-wing party "Independent Greeks", which formed the governing coalition of the Hellenic Parliament with the Syriza Party after Kammenos met with Prime Minister Alexis Tsipras, on 26 January 2015.He was named Greece's Minister of National Defence on 27 January 2015. He served until 20 August 2015, when the Syriza-ANEL coalition resigned, and continued as a lame duck until 28 August, when he was succeeded by the interim Minister, Ioannis Giangos. Read more on Wikipedia