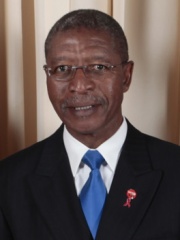 Bethuel Pakalitha Mosisili (born 14 March 1945) is a former Mosotho politician who retired in January 2019. He was Prime Minister of Lesotho from May 1998 to June 2012 and again from March 2015 to June 2017. He led the Lesotho Congress for Democracy (LCD), to a near-total victory in the 1998 election, and under his leadership the party also won majorities in the 2002 and 2007 elections. Read more on Wikipedia

Since 2007, the English Wikipedia page of Pakalitha Mosisili has received more than 109,302 page views. His biography is available in 31 different languages on Wikipedia making him the 10,500th most popular politician.

Among politicians, Pakalitha Mosisili ranks 10,444 out of 14,801. Before him are Abeid Karume, Alexander Rueb, Jahanara Begum, Boris Pankin, Eudamidas I, and João do Canto e Castro. After him are Petre P. Carp, Ana Brnabić, Per Borten, Mohammad Hamid Ansari, Saif al-Islam Gaddafi, and Juan Bautista Sacasa.

Others born in Lesotho

Among POLITICIANS In Lesotho