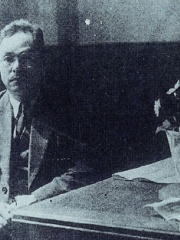 Pak Hon-yong or Park Heon-young (Korean: 박헌영; Hanja: 朴憲永; 28 May 1900 – 18 December 1955) was a Korean independence activist, politician, philosopher, communist activist and one of the main leaders of the Korean communist movement during Japan's colonial rule (1910–1945). His nickname was Ijong (이정) and Ichun (이춘), his courtesy name being Togyong (덕영). During the Japanese occupation of Korea, he tried to organize the Korean Communist Party. Read more on Wikipedia

Pak Hon-yong is most famous for his literary work, "The Tale of the Dog" (개구리 이야기). The book is about a dog that is abandoned by its owner and has to fend for itself in the wilderness.

Among politicians, Pak Hon-yong ranks 2,726 out of 15,710. Before him are Charles III, Duke of Lorraine, Bindusara, Hamad bin Isa Al Khalifa, Archidamus II, Francesco II Sforza, and Maroboduus. After him are Victoire of France, Emperor Gaozong of Song, Abbas II of Egypt, Otto Wille Kuusinen, Beatrice of Naples, and János Áder.