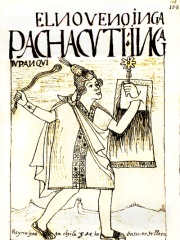 Pachacuti Inca Yupanqui (Quechua: Pachakutiq Inka Yupanki) was the ninth Sapa Inca (1418–1471/1472) of the Kingdom of Cusco which he transformed into the Inca Empire (Quechua: Tawantinsuyu). Most archaeologists now believe that the famous Inca site of Machu Picchu was built as an estate for Pachacuti.In Quechua Pachakutiq means "reformer of the world", and Yupanki means "with honor". During his reign, Cusco grew from a hamlet into an empire that could compete with, and eventually overtake, the Chimú. Read more on Wikipedia

Since 2007, the English Wikipedia page of Pachacuti has received more than 642,460 page views. His biography is available in 38 different languages on Wikipedia. Pachacuti is the 1,386th most popular politician (up from 1,403rd in 2019), the 9th most popular biography from Peru and the 5th most popular Peruvian Politician.

Pachacuti is most famous for his military conquests, which led to the expansion of the Inca Empire.

Page views of Pachacutis by language

Among politicians, Pachacuti ranks 1,386 out of 15,710. Before him are Carloman II, Ramiz Alia, Christopher of Bavaria, Carloman of Bavaria, Emperor Yang of Sui, and Jeongjong of Joseon. After him are Chilperic I, Yesugei, Conrad of Montferrat, Ivan Mazepa, Hongxi Emperor, and Haakon Sigurdsson.

Among people born in 1380, Pachacuti ranks 2. Before him is Thomas à Kempis. After him are Jamshīd al-Kāshī, Ferdinand I of Aragon, Poggio Bracciolini, Bernardino of Siena, Prokop the Great, Lidwina, Itzcoatl, İsa Çelebi, Yawar Waqaq, and Jalal al-Din Khan ibn Tokhtamysh. Among people deceased in 1460, Pachacuti ranks 2. Before him is Prince Henry the Navigator. After him are Richard of York, 3rd Duke of York, James II of Scotland, Gilles Binchois, John IV of Trebizond, Albert III, Duke of Bavaria, Guarino da Verona, Ma Huan, Michael Szilágyi, Gonçalo Velho Cabral, and Niccolò Antonio Colantonio.