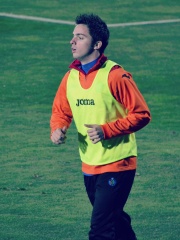 Pablo Sarabia García (Spanish pronunciation: [ˈpaβlo saˈɾaβja ɣaɾˈθi.a]; born 11 May 1992) is a Spanish professional footballer who plays for French club Paris Saint-Germain and the Spanish national team. Mainly an attacking midfielder, he can also play as a right winger.After playing youth football with Real Madrid he went on to represent Getafe and Sevilla in La Liga, amassing totals of 232 matches and 36 goals during eight seasons. Read more on Wikipedia

Since 2007, the English Wikipedia page of Pablo Sarabia has received more than 611,717 page views. His biography is available in 29 different languages on Wikipedia making him the 3,146th most popular soccer player.