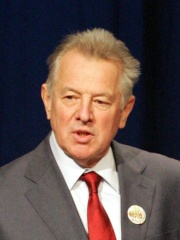 Pál Schmitt (Hungarian: [ˈpaːl ˈʃmitt]; born 13 May 1942) is a Hungarian Olympic fencer and politician who served as President of Hungary from 2010 to 2012. Schmitt was a successful fencer in his youth, winning two gold medals at the Summer Olympics. Later, he served as an ambassador during the 1990s and was a Vice President of the European Parliament from 2009 to 2010. Read more on Wikipedia

Since 2007, the English Wikipedia page of Pál Schmitt has received more than 80,013 page views. His biography is available in 51 different languages on Wikipedia making him the 3,526th most popular politician.

Among politicians, Pál Schmitt ranks 3,504 out of 14,801. Before him are John I Albert, Charles Emmanuel II, Duke of Savoy, Stephen Bocskai, Filippo Maria Visconti, Emperor Ningzong, and Tassos Papadopoulos. After him are Karim Khan Zand, Emperor Ankō, Emperor Shun of Han, Odo the Great, Patricio Aylwin, and Al-Adil I.