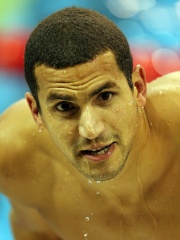 Oussama "Ous" Mellouli (Arabic: أسامة الملولي‎; born 16 February 1984) is a Tunisian swimmer who competes in the freestyle and medley events. He is a three-time Olympic medalist, is an African record holder, and trains with the USC Trojans team based at the University of Southern California, where he studied as a computer science undergraduate and swam collegiately. Since returning from an Adderall related drugs ban, Oussama Mellouli has been the 1500 m freestyle World champion at the 2009 World Aquatics Championships with a winning time of 14:37.28, then the second best performance of all time. Read more on Wikipedia

Since 2007, the English Wikipedia page of Oussama Mellouli has received more than 128,163 page views. His biography is available in 24 different languages on Wikipedia making him the 87th most popular swimmer.

Among SWIMMERS In Tunisia