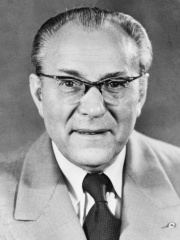 Otto Emil Franz Grotewohl (German pronunciation: [ˈɔtoː ˈɡʁoːtəvoːl]; 11 March 1894 – 21 September 1964) was a German politician who served as the first prime minister of the German Democratic Republic (GDR/East Germany) from its foundation in October 1949 until his death in September 1964. Grotewohl was a Social Democratic Party (SPD) politician in the Free State of Brunswick during the Weimar Republic and leader of the party branch in the Soviet Occupation Zone after World War II. Grotewohl led the SPD's merger with the Communist Party (KPD) to form the Socialist Unity Party of Germany (SED) in 1946 and served as co-chairman of the party with KPD leader Wilhelm Pieck until 1950. Read more on Wikipedia

Otto Grotewohl was a German politician who served as the head of the East German government. He was the first prime minister of the German Democratic Republic from 1949 to 1960.

Among politicians, Otto Grotewohl ranks 2,763 out of 15,577. Before him are Inessa Armand, Pharnaces II of Pontus, Marcel Cerdan, Cleopatra Eurydice of Macedon, Ferdinand II of Portugal, and Pak Hon-yong. After him are Joanna II of Naples, Nabis, Emperor Yingzong of Song, Frederick I, Elector of Brandenburg, Beatrice I, Countess of Burgundy, and Burebista.