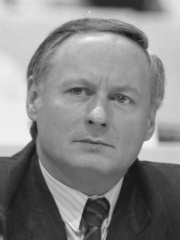 Oskar Lafontaine (German pronunciation: [ˈlafɔntɛn]; born 16 September 1943) is a German politician. He served as Minister-President of the state of Saarland from 1985 to 1998, and was federal leader of the Social Democratic Party (SPD) from 1995 to 1999. He was the lead candidate for the SPD in the 1990 German federal election, but lost by a wide margin. Read more on Wikipedia

Among politicians, Oskar Lafontaine ranks 7,422 out of 15,710. Before him are Spytihněv II, Duke of Bohemia, Félix Tshisekedi, Landgravine Charlotte of Hesse-Kassel, Bezprym, Irakli Tsereteli, and Hōjō Sōun. After him are Floris V, Count of Holland, Jungcheon of Goguryeo, Kirill Kondrashin, Louis III, Elector Palatine, Zhenjin, and Hans-Gert Pöttering.