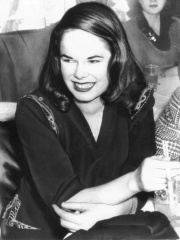 Oona O'Neill, Lady Chaplin (14 May 1925 – 27 September 1991) was an actress who was the daughter of American playwright Eugene O'Neill and English-born writer Agnes Boulton, and the fourth and last wife of English actor and filmmaker Charlie Chaplin. O'Neill's parents divorced when she was four years old, after which she was raised by her mother in Point Pleasant, New Jersey, and rarely saw her father. She first came to the public eye during her time at the Brearley School in New York City between 1940 and 1942, when she was photographed attending fashionable nightclubs with her friends Carol Marcus and Gloria Vanderbilt. Read more on Wikipedia

Oona O'Neill was the daughter of playwright Eugene O'Neill and actress Carlotta Monterey. She is most famous for being the inspiration for the character of Daisy in her father's play "Long Day's Journey Into Night."

Others born in Bermuda

Among ACTORS In Bermuda