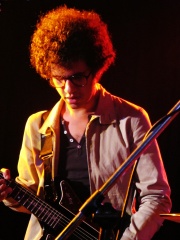 Omar Alfredo Rodríguez-López (born September 1, 1975) is an American guitarist, songwriter, producer and filmmaker. He is known for being the guitarist, song writer and band-leader of the Mars Volta from 2001 until their breakup in 2012, and is the guitarist for the alternative rock groups At the Drive-In, Antemasque and Bosnian Rainbows. He was also the bassist for the dub band De Facto. Read more on Wikipedia

Among musicians, Omar Rodríguez-López ranks 2,232 out of 2,675. Before him are Till Brönner, Gus G, Ralph Stanley, Chris Adler, Billy Gould, and Bob Johnston. After him are Roger Sanchez, Şebnem Ferah, Dave Abbruzzese, Stala, Hallucinogen, and ICS Vortex.

Among MUSICIANS In Puerto Rico

Among musicians born in Puerto Rico, Omar Rodríguez-López ranks 2. Before him are José Feliciano (1945).