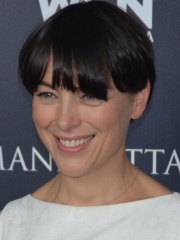 Olivia Haigh Williams (born 26 July 1968) is a British actress who has appeared in British and American films and television. After studying drama at the Bristol Old Vic Theatre School for two years followed by three years at the Royal Shakespeare Company, her first significant role was as Jane Fairfax in the British television film Emma (1996), based on Jane Austen's novel. She made her film debut in 1997's The Postman, followed by Rushmore (1998) and The Sixth Sense (1999). Read more on Wikipedia

Since 2007, the English Wikipedia page of Olivia Williams has received more than 2,464,933 page views. Her biography is available in 36 different languages on Wikipedia making her the 2,863rd most popular actor.