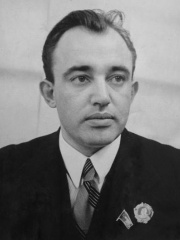 Oleksandr Yevdokymovych Korniychuk (Russian: Алекса́ндр Евдоки́мович Корнейчу́к, Ukrainian: Олександр Євдокимович Корнійчук, May 25 [12 o.s.], 1905 – May 14, 1972) was a Ukrainian playwright, literary critic and state official (a Soviet Foreign Minister’s first deputy in 1943–1945).His most notable works were plays such as Zahybel eskadry (The Death of the Squadron) (1933), Platon Krechet (1934), Bohdan Khmelnytsky (1938), his pro-collectivization comedy In the Steppes of Ukraine (1940), and The Front (1942). Read more on Wikipedia

Since 2007, the English Wikipedia page of Oleksandr Korniychuk has received more than 15,644 page views. His biography is available in 15 different languages on Wikipedia making him the 10,751st most popular politician.

Among politicians, Oleksandr Korniychuk ranks 10,692 out of 14,801. Before him are Sharif Sheikh Ahmed, Francisco Antonio Pinto, Alcetas II of Macedon, Ariarathes VII of Cappadocia, Laodice II, and Hannes Hafstein. After him are Robert Byrd, Vineh of Bulgaria, Carl, 3rd Prince of Leiningen, Salchak Toka, Miroslav Ondříček, and John Bercow.