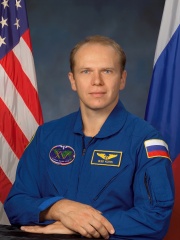 Oleg Valeriyevich Kotov (Russian: Олег Валериевич Котов) was born on October 27, 1965, in Simferopol, Crimean oblast in the Ukrainian SSR. After a career as a physician assigned to the Soviet space program, he joined the Russian cosmonaut corps. He has flown three long duration spaceflights on the International Space Station logging over 526 days in space. Read more on Wikipedia

Among astronauts, Oleg Kotov ranks 290 out of 524. Before him are Dale Gardner, George Nelson, Christina Koch, Luca Parmitano, Catherine Coleman, and Nie Haisheng. After him are Susan Helms, Roberto Vittori, Aleksandr Skvortsov, Stephen Bowen, Sergei Zalyotin, and Jeffrey A. Hoffman.

Among ASTRONAUTS In Ukraine