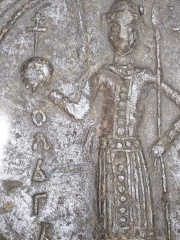 Oleg I of Chernigov

Oleg Svyatoslavich (Russian: Олег Святославич; c. 1052 – August 1115) was a Rurikid prince whose equivocal adventures ignited political unrest in Kievan Rus' at the turn of the 11th and 12th centuries. Oleg was a younger son of Sviatoslav Iaroslavich, Prince of Chernigov and his first wife, Killikiya. Read more on Wikipedia

Page views of Oleg I of Chernigovs by language

Among politicians, Oleg I of Chernigov ranks 11,082 out of 15,577. Before him are Muhammad Shah of Brunei, Kevin Rudd, Dirk VII, Count of Holland, Mari Alkatiri, Vladimir Shadrin, and Charles de Bonchamps. After him are Zhang Dejiang, Julia Livia, Robert Lansing, Princess Antoinette of Saxe-Altenburg, Lucius Licinius Sura, and Ali ibn Muhammad.