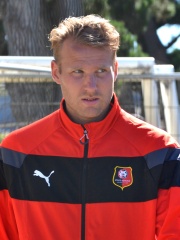 Nils Ola Toivonen (Swedish pronunciation: [ˈûːla ˈtɔ̌ɪvʊnɛn]; born 3 July 1986) is a Swedish footballer, who plays as an attacking midfielder or striker for Malmö FF. After beginning his career in his home town team of Degerfors, he spent time in the top flight for Örgryte before he got signed by Malmö FF before the 2007 season. Having spent two seasons with Malmö, breaking through with 14 league goals in 2008, he joined Dutch club PSV Eindhoven in January 2009. Toivonen remained there for five-and-a-half seasons, winning the KNVB Cup in 2012, until a €2.5 million move to Rennes. Read more on Wikipedia

Since 2007, the English Wikipedia page of Ola Toivonen has received more than 640,993 page views. His biography is available in 40 different languages on Wikipedia making him the 3,213th most popular soccer player.