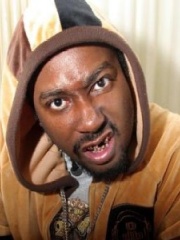 Russell Tyrone Jones (November 15, 1968 – November 13, 2004), better known by his stage name Ol' Dirty Bastard (often abbreviated as ODB), was an American rapper and producer. He was one of the founding members of the Wu-Tang Clan, a rap group primarily from Staten Island, New York City, which rose to mainstream prominence with its 1993 debut album Enter the Wu-Tang (36 Chambers).His professional success was hampered by frequent legal troubles, including incarceration. He died on November 13, 2004, of an accidental drug overdose, two days before his 36th birthday.Ol' Dirty Bastard was noted for his "outrageously profane, free-associative rhymes delivered in a distinctive half-rapped, half-sung style". Read more on Wikipedia

Among singers, Ol' Dirty Bastard ranks 1,625 out of 3,541. Before him are Eddie Money, Irma Thomas, Raekwon, Joey Belladonna, Billy Fury, and Tones and I. After him are Alesha Dixon, Rakim, Redfoo, Benjamin Biolay, Grimes, and Origa.