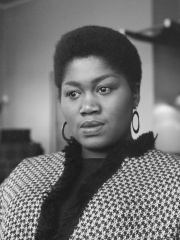 Odetta Holmes (December 31, 1930 – December 2, 2008), known as Odetta, was an American singer, actress, guitarist, lyricist, and a civil and human rights activist, often referred to as "The Voice of the Civil Rights Movement". Her musical repertoire consisted largely of American folk music, blues, jazz, and spirituals. An important figure in the American folk music revival of the 1950s and 1960s, she influenced many of the key figures of the folk-revival of that time, including Bob Dylan, Joan Baez, Mavis Staples, and Janis Joplin. Read more on Wikipedia

Page views of Odettas by language

Among singers, Odetta ranks 844 out of 3,541. Before her are Halid Bešlić, Elisabeth Schumann, Minnie Riperton, Kate Ryan, Carlos do Carmo, and Katja Ebstein. After her are Valentina Tolkunova, Paula Abdul, Kumar Sanu, Polad Bülbüloğlu, Eric Johnson, and Liane Augustin.