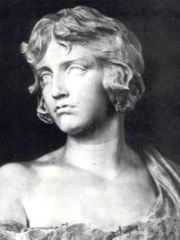 Nossis (Greek: Νοσσίς) was a Hellenistic Greek poet from Epizephyrian Locris in southern Italy. She seems to have been active in the early third century BC, as she wrote an epitaph for the Hellenistic dramatist Rhinthon. Read more on Wikipedia

Page views of Nosses by language

Among writers, Nossis ranks 3,543 out of 5,794. Before her are Sigbjørn Obstfelder, Olaf Bull, Maxwell Anderson, Jacob of Edessa, Yusuf Idris, and Bernard Pivot. After her are Radclyffe Hall, Elena Văcărescu, Charlie Kaufman, Jean Tardieu, Alfred Kerr, and Zülfü Livaneli.