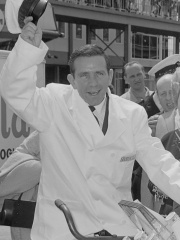 Sir Norman Joseph Wisdom, (4 February 1915 – 4 October 2010) was an English actor, comedian and singer-songwriter best known for a series of comedy films produced between 1953 and 1966 featuring his hapless onscreen character that was often called Norman Pitkin. He was awarded the 1953 BAFTA Award for Most Promising Newcomer to Leading Film Roles following the release of Trouble in Store, his first film in a lead role. Wisdom gained celebrity status in lands as far apart as South America, Iran and many Eastern Bloc countries, particularly in Albania where his films were the only ones by Western actors permitted by dictator Enver Hoxha to be shown. Read more on Wikipedia

Among actors, Norman Wisdom ranks 2,424 out of 10,030. Before him are Lesley-Anne Down, Hayden Christensen, Sarah Rafferty, David Doyle, Bruce Davison, and Shirley Jones. After him are Marie Dressler, Natalia Makarova, Larry Semon, David Tennant, Rose McGowan, and Catherine Hicks.