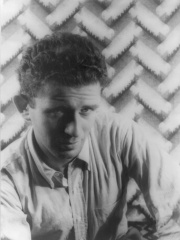 Norman Kingsley Mailer (January 31, 1923 – November 10, 2007) was an American novelist, journalist, essayist, playwright, activist, filmmaker and actor. In a career spanning over six decades, Mailer had 11 best-selling books, at least one in each of the seven decades after World War II—more than any other post-war American writer.His novel The Naked and the Dead was published in 1948 and brought him early and wide renown. His 1968 nonfiction novel Armies of the Night won the Pulitzer Prize for non-fiction as well as the National Book Award. Read more on Wikipedia

Among writers, Norman Mailer ranks 1,248 out of 5,794. Before him are Thomas of Celano, Elsa Triolet, William Styron, Siegfried Lenz, Annemarie Schwarzenbach, and Cornelius Gallus. After him are Lee Child, Avienus, Mario Benedetti, Nicolas-Edme Rétif, Emmanuelle Arsan, and Hartmann Schedel.