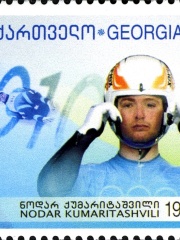 Nodar Kumaritashvili (Georgian: ნოდარ ქუმარიტაშვილი; pronounced [nɔdar kʰumaritʼaʃvili]; 25 November 1988 – 12 February 2010) was a Georgian luge athlete who suffered a fatal crash during a training run for the 2010 Winter Olympics competition in Whistler, British Columbia, Canada, on the day of the opening ceremony. He became the fourth athlete to die during preparations for a Winter Olympics, and the eighth athlete to die as a result of Olympic competition or during practice at their sport’s venue at an Olympic Games. Kumaritashvili, who first began to participate in luge when he was 13, came from a family of seasoned lugers: his grandfather had introduced the sport to Soviet Georgia, and both his father and uncle had competed when they were younger, with his uncle later serving as the head of the Georgian Luge Federation. Read more on Wikipedia

Among ATHLETES In Georgia