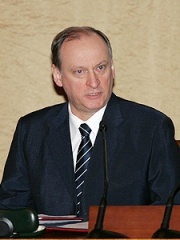 Nikolai Platonovich Patrushev (Russian: Никола́й Плато́нович Па́трушев; born 11 July 1951) is a Russian politician, security officer and intelligence officer who has served as the secretary of the Security Council of Russia since 2008. He previously served as the director of the Federal Security Service (FSB) from 1999 to 2008. Read more on Wikipedia

Among politicians, Nikolai Patrushev ranks 10,551 out of 15,710. Before him are Bel-ibni, Dedumose I, Julia Livia, Czesław Kiszczak, Anneli Jäätteenmäki, and Kim Il. After him are Anthony Panizzi, Mohammad Afzal Khan, Mustafa Ould Salek, Indravarman I, Otto Gessler, and Charles de Broqueville.