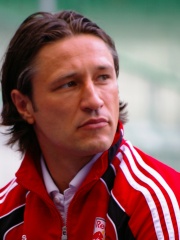 Niko Kovač (Croatian pronunciation: [nǐːko kǒʋaːtʃ, – kô-]; born 15 October 1971) is a Croatian professional football coach and former player who is the manager of Ligue 1 club Monaco. Kovač was the long-standing captain of the Croatia national team until his retirement from international football in January 2009. A defensive midfielder who was known for his excellent passing and tackling skills, Kovač was, at the time of his retirement, the oldest player in the Croatian squad and had captained them at the 2006 FIFA World Cup and UEFA Euro 2008. Read more on Wikipedia