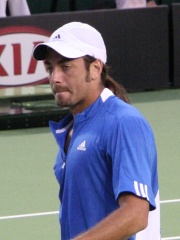 Nicolás Alejandro Massú Fried (Spanish pronunciation: [nikoˈlaz maˈsu]; born 10 October 1979), nicknamed El Vampiro (Spanish: "the vampire"), is a Chilean retired tennis player, a former world No. 9 in singles and winner of two Olympic gold medals. He is the only male player to have won both the singles and doubles gold medals during the same games in modern Olympic tennis (since 1988), the only two gold medals Chile has won at the Olympics. Read more on Wikipedia

Since 2007, the English Wikipedia page of Nicolás Massú has received more than 296,887 page views. His biography is available in 34 different languages on Wikipedia making him the 179th most popular tennis player.

Among TENNIS PLAYERS In Chile