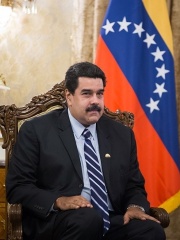 Nicolás Maduro Moros (Spanish: [nikoˈlaz maˈðuɾo ˈmoɾos] (listen); born 23 November 1962) is a Venezuelan politician and president of Venezuela since 2013, with his presidency under dispute since 2019. Beginning his working life as a bus driver, Maduro rose to become a trade union leader before being elected to the National Assembly in 2000. He was appointed to a number of positions under President Hugo Chávez and was described in 2012 by the Wall Street Journal as the "most capable administrator and politician of Chávez's inner circle". Read more on Wikipedia

Among politicians, Nicolás Maduro ranks 1,538 out of 15,710. Before him are Manco Cápac, Shah Rukh, Prince Bernhard of Lippe-Biesterfeld, Seonjo of Joseon, Paul-Henri Spaak, and Alexios V Doukas. After him are An Lushan, Yolande de Polastron, Constantine VI, Felix Yusupov, Möngke Khan, and Nancy Pelosi.