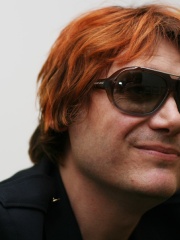 Nicholas Allen Jones (born 20 January 1969), known as Nicky Wire, is the Welsh lyricist, bassist and occasional vocalist with the Welsh alternative rock band Manic Street Preachers. Prior to the group, Wire studied politics at university; this would later influence his lyrical work. He was co-writer of the band's lyrics (alongside Richey Edwards) from 1989 to 1995, and has been the band's primary lyricist, following Edwards' disappearance since 1995. Read more on Wikipedia

Among singers, Nicky Wire ranks 3,232 out of 3,541. Before him are Yui Yatyer, Elina Nechayeva, Jake Shears, Junjun, Alec Benjamin, and Sopho Gelovani. After him are Chingy, Luiz Ejlli, Plan B, Kid Ink, Swae Lee, and Ryan Dolan.