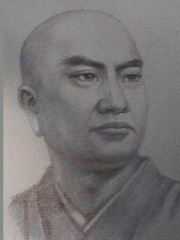 Nichiren (16 February 1222 – 13 October 1282) was a Japanese Buddhist priest and philosopher of the Kamakura period.: 609–610 Nichiren: 77 : 1  declared that the Lotus Sutra alone contains the highest truth of Buddhist teachings suited for the Third Age of Buddhism, insisting that the Sovereign of Japan and its people should support only this form of Buddhism and eradicate all others. He advocated the repeated recitation of its title, Nam(u)-myoho-renge-kyo as the only path to Buddhahood and held that Shakyamuni Buddha and all other Buddhist deities were extraordinary manifestations of a particular Buddha-nature termed Myoho-Renge that is equally accessible to all. He declared that believers of the Sutra must propagate it even under persecution.Nichiren was a prolific writer and his biography, temperament, and the evolution of his beliefs has been gleaned primarily from his own writings.: 99 : 442  He claimed the reincarnation of Jōgyō bodhisattva in a past life, and designated six senior disciples, of which the claims to successorship are contested. Read more on Wikipedia

Page views of Nichirens by language

Among religious figures, Nichiren ranks 598 out of 2,238. Before him are Angelus Silesius, Jacobus da Varagine, Pope Stephen VI, Pope Severinus, Pope Leo VI, and William Laud. After him are Pope Romanus, Pope Theodore I, Theophanes the Confessor, Tarcisius, Ananias of Damascus, and Gregory Thaumaturgus.

Among people born in 1222, Nichiren ranks 1. After him are Andrey II of Vladimir and Henry III the White. Among people deceased in 1282, Nichiren ranks 4. Before him are Michael VIII Palaiologos, Llywelyn ap Gruffudd, and Abaqa Khan. After him are Agnes of Bohemia, Mengu-Timur, George Akropolites, Ibn Khallikan, Traidenis, Mechthild of Magdeburg, and Margaret Sambiria.