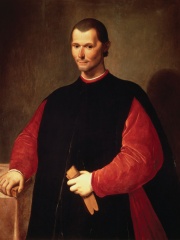 Niccolò di Bernardo dei Machiavelli ( MAK-ee-ə-VEL-ee, US also MAHK-, Italian: [nikkoˈlɔ mmakjaˈvɛlli]; 3 May 1469 – 21 June 1527), occasionally rendered in English as Nicholas Machiavel ( MAK-ee-ə-vel, US also MAHK-; see below), was an Italian diplomat, author, philosopher and historian who lived during the Renaissance. He is best known for his political treatise The Prince (Il Principe), written in about 1513 but not published until 1532. He has often been called the father of modern political philosophy and political science.For many years he served as a senior official in the Florentine Republic with responsibilities in diplomatic and military affairs. Read more on Wikipedia

Niccolò Machiavelli is most famous for his book The Prince, which is a guide for rulers on how to maintain power.

Among philosophers, Niccolò Machiavelli ranks 12 out of 1,081. Before him are René Descartes, Gautama Buddha, Immanuel Kant, Jean-Jacques Rousseau, Avicenna, and John Locke. After him are Friedrich Nietzsche, Francis Bacon, Augustine of Hippo, Thales of Miletus, Thomas Aquinas, and Georg Wilhelm Friedrich Hegel.