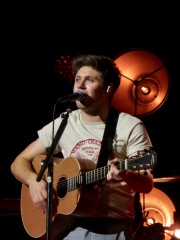 Niall James Horan (; born 13 September 1993) is an Irish singer and songwriter. He rose to prominence as a member of the boy band One Direction, formed in 2010 on the British singing competition The X Factor. Following the band's hiatus in 2016, Horan signed a recording deal as a solo artist with Capitol Records. Horan's debut solo album, Flicker (2017), debuted at number one in Ireland and the US, and reached the top three in Australia and the UK. Read more on Wikipedia

Since 2007, the English Wikipedia page of Niall Horan has received more than 8,306,971 page views. His biography is available in 43 different languages on Wikipedia making him the 1,399th most popular singer.

Among singers, Niall Horan ranks 1,406 out of 3,001. Before him are Halsey, MØ, Whigfield, Fat Joe, Anne Veski, and Mac DeMarco. After him are Gilda, Seo Taiji, Lee Donghae, Deryck Whibley, Sarit Hadad, and Nikka Costa.