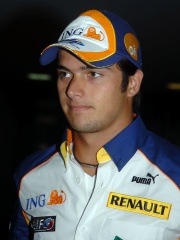 Nelson Angelo Tamsma Piquet Souto Maior (born July 25, 1985), also known as Nelson Piquet Junior or Nelsinho Piquet, is a Brazilian stock car racing driver and former Formula One and Formula E driver where he was champion in the 2014–15 season, and also races a Rebellion R-One LMP1 in the FIA World Endurance Championship. The son of three-time Formula One world champion Nelson Piquet, he was signed as test driver for Renault Formula One team for the 2007 season, and was promoted to the race team for 2008, before being dropped midway through the 2009 season. After losing his drive, it emerged that he had, under instruction from senior members of the team, crashed deliberately at the 2008 Singapore Grand Prix to help his teammate, Fernando Alonso, win the race. Read more on Wikipedia