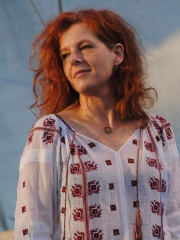 Neko Richelle Case (; born September 8, 1970) is an American singer-songwriter and member of the Canadian indie rock group the New Pornographers. Case has a powerful, untrained contralto voice, which has been described by contemporaries and critics as a "flamethrower," "a powerhouse [which] seems like it might level buildings," "a 120-mph fastball," and a "vocal tornado". Critics also note her idiosyncratic, "cryptic," "imagistic" lyrics, and credit her as a significant figure in the early 21st-century American revival of the tenor guitar. Read more on Wikipedia

Among musicians, Neko Case ranks 2,611 out of 2,675. Before her are Danja, Kate Voegele, Panda Bear, Ty Segall, Jeremy Davis, and Haley Reinhart. After her are Lissie, Yitzhak Yedid, Madeon, Kali Uchis, Greyson Chance, and Andy C.