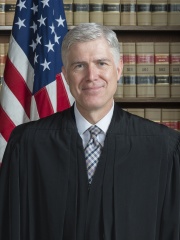 Neil McGill Gorsuch ( GOR-sutch; born August 29, 1967) is an associate justice of the Supreme Court of the United States. He was nominated by President Donald Trump on January 31, 2017 and has served since April 10, 2017.Gorsuch was born and spent his early life in Denver, Colorado, then lived in Bethesda, Maryland, while attending prep school. He earned a Bachelor of Arts from Columbia University, a Juris Doctor from Harvard University, and after practicing law for 15 years, received a Doctor of Philosophy degree in Law from the University of Oxford, where he attended as a Marshall Scholar. Read more on Wikipedia

Among judges, Neil Gorsuch ranks 39 out of 39. Before her are Harlan F. Stone, George Wythe, Michael Mukasey, Harry Blackmun, Ranjan Gogoi, and Samuel Chase. After her are Nasirul Mulk and Thomas Hoeren.