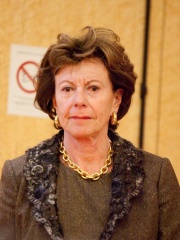 Neelie Kroes (Dutch pronunciation: [ˈneːli ˈkrus]; born 19 July 1941) is a retired Dutch politician of the People's Party for Freedom and Democracy (VVD) and businessperson who served as European Commissioner from 22 November 2004 to 1 November 2014.Kroes studied Economics at the Rotterdam School of Economics obtaining a Master of Economics degree. Kroes worked as a researcher at her alma mater from September 1963 to April 1968 and as a corporate director for a transport company in Delft from April 1968 until August 1971 and for the chamber of commerce of Rotterdam from July 1969 until August 1971. Kroes became a Member of the House of Representatives shortly after the election of 1971 on 3 August 1971 and served as a frontbencher and spokesperson for Transport and Education. Read more on Wikipedia