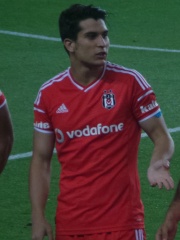 Necip Uysal (Turkish pronunciation: [nedʒip ujsaɫ], born 24 January 1991) is a Turkish professional footballer of Albanian descent who plays as a midfielder for Turkish club Beşiktaş.Uysal started his footballing career with amateur side Yıldırım Bosnaspor in 2001. He spent three years with the club before being transferred to Beşiktaş. Read more on Wikipedia

Since 2007, the English Wikipedia page of Necip Uysal has received more than 89,855 page views. Her biography is available in 15 different languages on Wikipedia making her the 10,059th most popular soccer player.