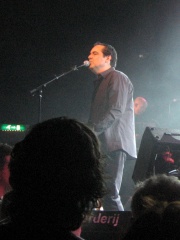 Neal Morse (born August 2, 1960) is an American singer, musician and composer based in Nashville, Tennessee. In 1992, he formed the progressive rock band Spock's Beard with his brother Alan and released an album which was moderately successful. In 1999, he joined former Dream Theater co-founder Mike Portnoy, Flower Kings' Roine Stolt and Marillion's Pete Trewavas to form the super-group Transatlantic. Read more on Wikipedia

Since 2007, the English Wikipedia page of Neal Morse has received more than 426,162 page views. His biography is available in 17 different languages on Wikipedia making him the 1,226th most popular singer.

Among singers, Neal Morse ranks 1,233 out of 3,001. Before him are Mahsun Kırmızıgül, Guru, Olga Jackowska, Nina Persson, IU, and Nancy Wilson. After him are Jennie, Tiziano Ferro, Emma Shapplin, Jovanotti, Daniel Powter, and Alannah Myles.