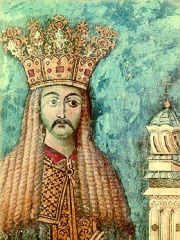 Neagoe Basarab (Romanian pronunciation: [ne̯aˈɡo.e basaˈrab]; c.1459 – 15 September 1521) was the Voivode (Prince) of Wallachia between 1512 and 1521. Born into the boyar family of the Craioveşti (his reign marks the climax of the family's political influence) as the son of Pârvu Craiovescu or Basarab Țepeluș cel Tânăr, Neagoe Basarab, who replaced Vlad cel Tânăr after the latter rejected Craioveşti tutelage, was noted for his abilities and competence. Read more on Wikipedia

Since 2007, the English Wikipedia page of Neagoe Basarab has received more than 86,987 page views. His biography is available in 15 different languages on Wikipedia. Neagoe Basarab is the 10,288th most popular politician.

Among people born in 1482, Neagoe Basarab ranks 8. Before him are Frederick II, Elector Palatine, Jo Gwang-jo, Johannes Oecolampadius, George Martinuzzi, Rana Sanga, and Pietro Loredan. After him is Ernest, Margrave of Baden-Durlach. Among people deceased in 1521, Neagoe Basarab ranks 16. Before him are Suzanne, Duchess of Bourbon, Francisco Serrão, Raffaele Riario, Edward Stafford, 3rd Duke of Buckingham, Jorge Álvares, and Tamás Bakócz. After him are Duarte Barbosa and John II, Duke of Cleves.