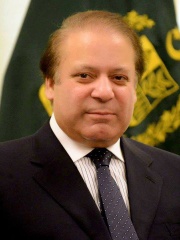 Mian Muhammad Nawaz Sharif (Urdu: میاں محمد نواز شریف‎, born 25 December 1949) is a Pakistani businessman and politician who served as the prime minister of Pakistan for three non-consecutive terms. Sharif is the longest-serving prime minister of Pakistan having served a total of more than 9 years. Born into the upper-middle class Sharif family in Lahore, Sharif is the son of Muhammad Sharif, the founder of Ittefaq and Sharif Group. Read more on Wikipedia

Since 2007, the English Wikipedia page of Nawaz Sharif has received more than 3,724,099 page views. His biography is available in 68 different languages on Wikipedia making him the 8,236th most popular politician.