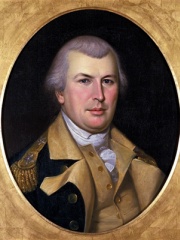 Nathanael Greene (August 7 [O.S. July 27] 1742 – June 19, 1786, sometimes misspelled Nathaniel) was a major general of the Continental Army in the American Revolutionary War. He emerged from the war with a reputation as General George Washington's most gifted and dependable officer, and is known for his successful command in the southern theater of the war. Born into a prosperous Quaker family in Warwick, Rhode Island, Greene became active in the resistance to British revenue policies in the early 1770s and helped establish the Kentish Guards, a state militia. Read more on Wikipedia

Since 2007, the English Wikipedia page of Nathanael Greene has received more than 1,050,115 page views. His biography is available in 26 different languages on Wikipedia making him the 1,069th most popular military personnel.

Among people born in 1742, Nathanael Greene ranks 18. Before him are François Laurent d'Arlandes, Pōmare I, Anders Jahan Retzius, Joseph Brant, Félix de Azara, and Jean Baptiste François Pierre Bulliard. After him are David Bushnell and James Wilson. Among people deceased in 1786, Nathanael Greene ranks 15. Before him are Tokugawa Ieharu, Eva Ekeblad, Antonio Sacchini, Thomas Wright, John Byron, and Pierre Poivre. After him are Princess Amelia of Great Britain and Gaspar de Portolá.