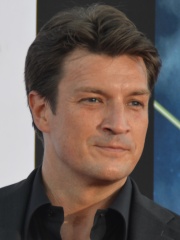 Nathan Fillion (; born March 27, 1971) is a Canadian-American actor, best known for the leading roles of Captain Malcolm "Mal" Reynolds on Firefly and its film continuation Serenity, Richard Castle on Castle, and is currently starring as John Nolan on The Rookie. Fillion has acted in traditionally distributed films like Slither and Trucker, Internet-distributed films like Dr. Horrible's Sing-Along Blog, television soap operas, sitcoms and theater. Read more on Wikipedia

Since 2007, the English Wikipedia page of Nathan Fillion has received more than 8,220,646 page views. His biography is available in 46 different languages on Wikipedia making him the 1,598th most popular actor.