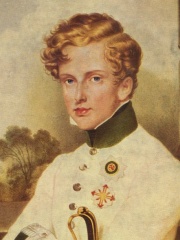 Napoleon II (Napoléon François Joseph Charles Bonaparte; 20 March 1811 – 22 July 1832) was disputed Emperor of the French for a few weeks in 1815. The son of Emperor Napoleon I and Empress Marie Louise, he had been Prince Imperial of France and King of Rome since birth. After the fall of his father, he lived the rest of his life in Vienna and was known in the Austrian court as Franz, Duke of Reichstadt for his adult life (from the German version of his second given name, along with a title he was granted by the Austrian emperor in 1818). Read more on Wikipedia

Among politicians, Napoleon II ranks 209 out of 15,710. Before him are Slobodan Milošević, Henry VII of England, Catherine I of Russia, Rudolf Hess, Akbar, and Charles X of France. After him are Emperor Meiji, William the Silent, Empress Dowager Cixi, James VI and I, Scipio Africanus, and Thutmose III.